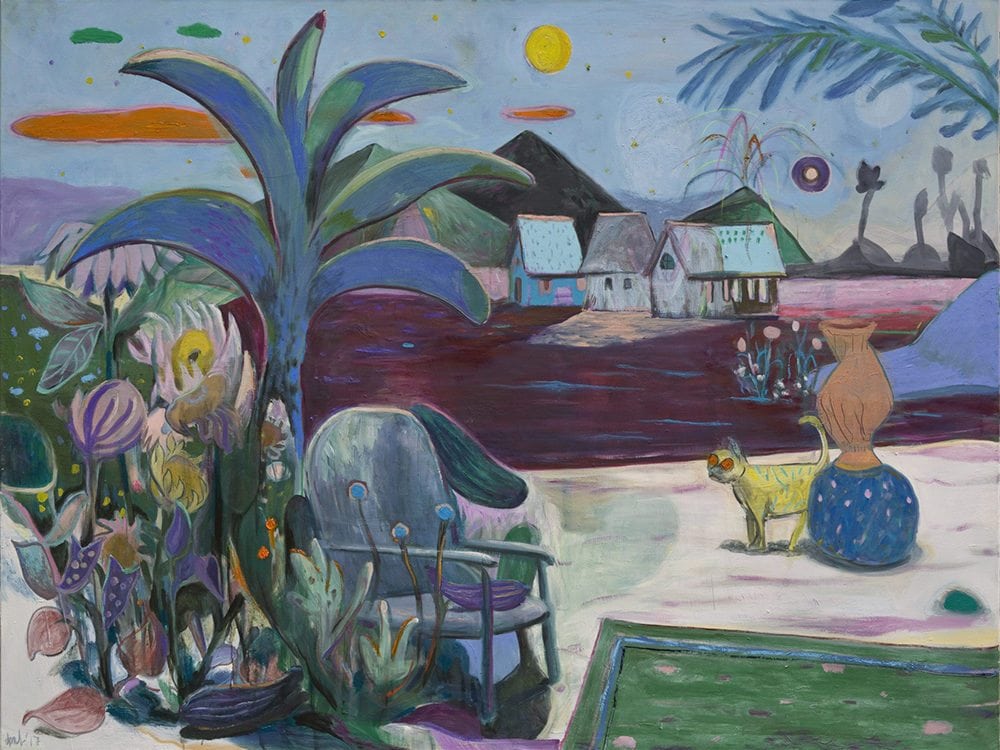 The strongly pronounced style of Thurau, is rooted deeply in art history and might draw the mind to the emotional landscapes of Edward Munch or the colourful motifs of Gauguin, while at the same time freely experimenting with the form. His vibrant paintings focus on the contrast between the ironic and the earnest; and it is in these contrasts we find the motive for the title, Twilight.

Besides referencing the handling of volatile light within the work, Twilight, also alludes to a threshold, the moment of transition from one condition to another. Thurau allows celestial bodies to take colourful form in his work and all seems to exist in the fickle hour of twilight, where the light is capricious and anything is possible. The process of creating, too, resides in these transcending borders of deep night and gleaming day. For Daniel M. Thurau, painting is as elusive and fleeting an act as twilight itself. Art, in it’s nature, is not something that is, but rather something that becomes, something that happens. The artist is a creature of the twilight, one who moves between worlds and dares to dream of claiming the ephemeral.

Being an autodidact for several years, Thurau eventually studied at both Norwich University of the Arts in UK and College of Fine Arts in Hamburg. His work has been exhibited internationally and at art fairs such as Art Frankfurt and VIENNAFAIR. His latest show was at Kunstverein Wassermühle in Lohne and Künstlerhaus Bethanien in Berlin.

Galleri Christoffer Egelund cordially invites you to the opening of Daniel M. Thurau: Twilight, Friday February the 2nd from 4pm to 7pm. The artist will be present during the opening reception. The exhibition runs until March 10th 2018. Opening hours: Tuesday-Friday 11-18, Saturdays 12-16. Please visit Christofferegelund.dk for more details and a full list of exhibited works.