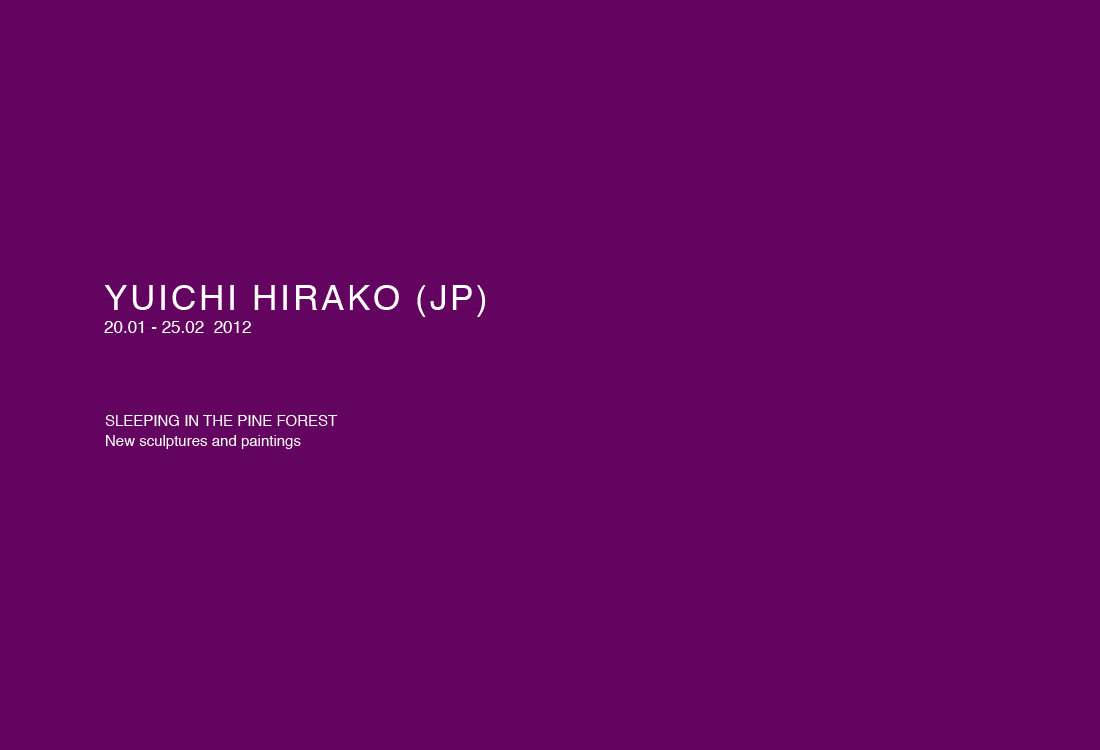 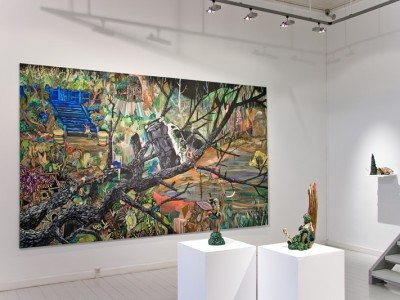 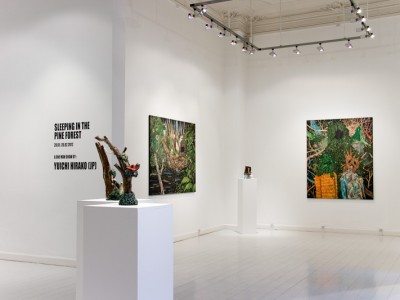 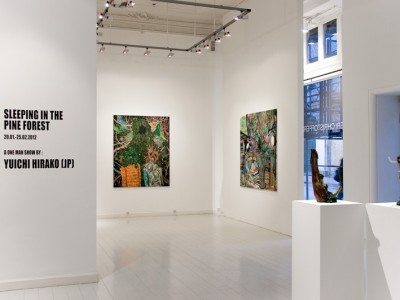 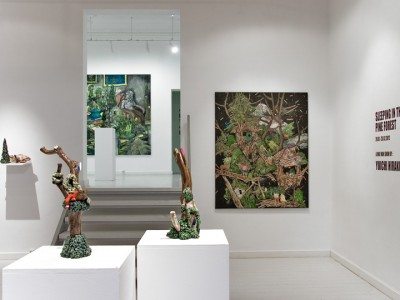 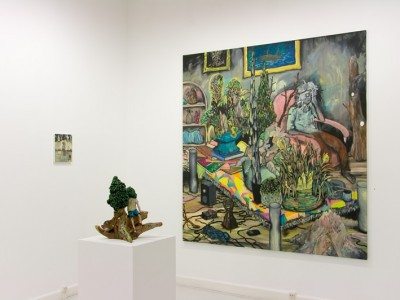 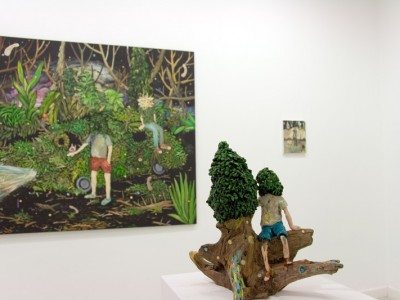 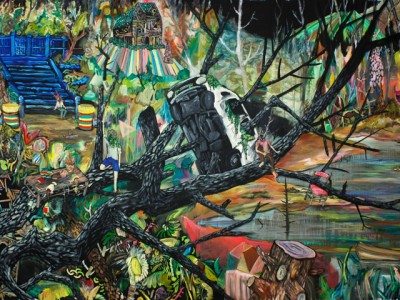 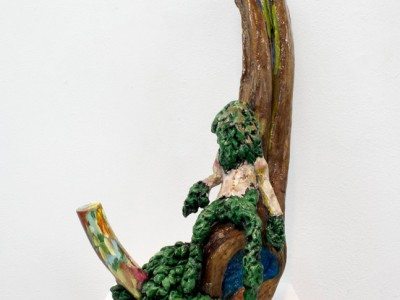 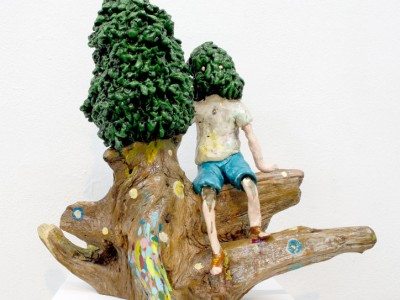 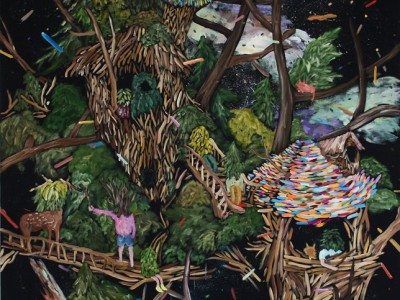 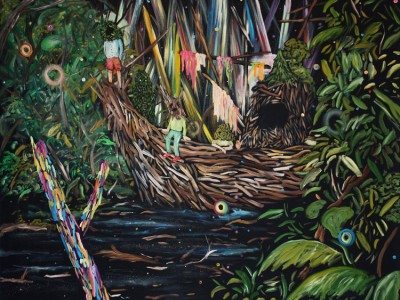 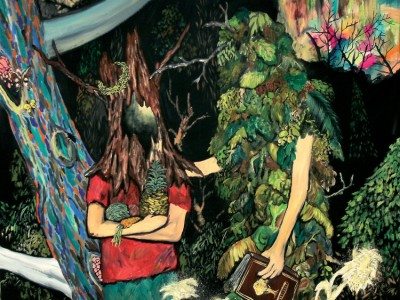 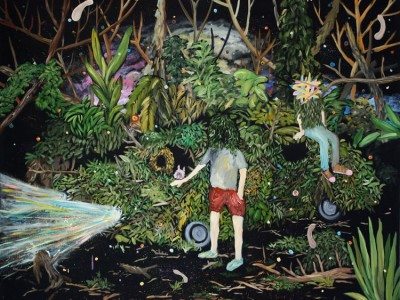 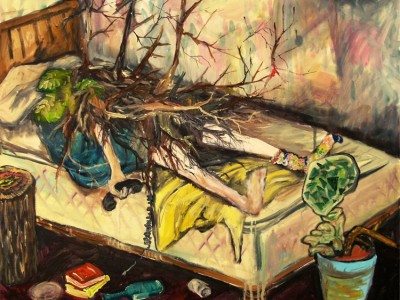 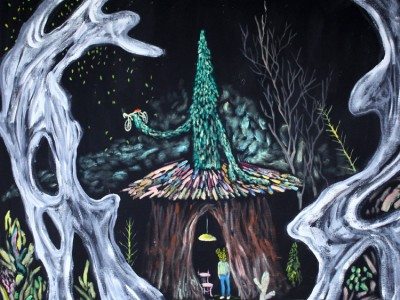 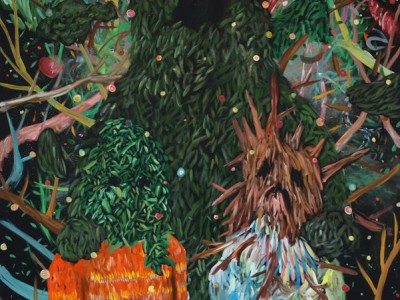 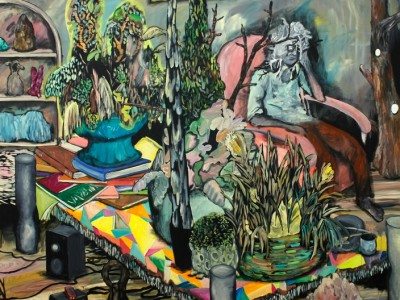 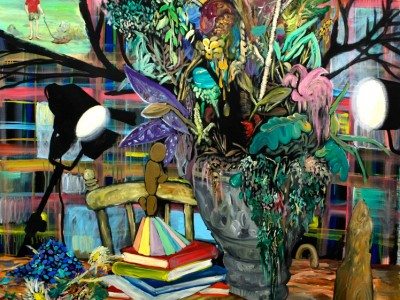 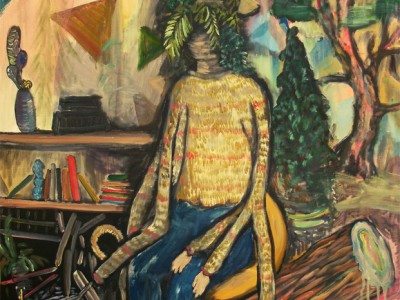 It is with great pleasure that Galleri Christoffer Egelund presents ”Sleeping In the Pine Forest”, the gallery’s first solo show with the Japanese Artist Yuichi Hirako. The young artist presents new paintings and sculptures, which brings us into a colourful, dramatic and dreamlike universe. ”Insanitorium” is the name of another exhibition shown in the gallery’s project room. In this show Danish artist David Dellagi presents sculptures and collages where themes like horror, naivety and black humor go hand in hand.

Yuichi Hirako is interested in the human relationship with nature and the forest as a special place. Although many of us surround ourselves with plants every day, eg. house plants and in parks, there is an apparent division between us and the other living beings – that is the plants. Some Japanese see the forest as a sacred place. On the contrary in Western folklore, the forest is often portrayed as being uncivilized and barbaric.

Hirako strives in his work to break the boundaries between humans and nature. His paintings and sculptures depict people with plant-like heads placed in forests. In his largest painting “Memories of My Garden/Lake Side” plants, people, houses and a car are weaved helplessly together. In other expressive paintings we encounter a green forest-creature, which gives fuel to our experience of fantasy and adventure. Whether the forest is a good or unpleasant place is entirely up to the viewer. In other words; in the work of Hirako nature and culture collide, and we are left in a primitive state.

Yuichi Hirako (b. 1982 in Okayama, Japan) graduated in 2005 from Wimbledon College of Art in London. He lives and works in Tokyo, and he has participated in several group- and solo shows. To name a few the artist has exhibited at The Museum of Modern Art, Gunma, Museum of Contemporary Art in Tokyo, Aichi Arts Center, The Museum of Kyoto, etc. In 2012 the artist will present solo shows at INAX Gallery, GALLERY MoMo Ryogoku and Tokyo Wonder Site Art Cafe kurage in Tokyo. See the artist’s works on display click here
In the Project Room David Dellagi presents spectacular works where fear, struggle, innocence and sexual frustration are humorously presented. His motifs seem to express a certain state of mind in a very direct and urgent manner, and his works clearly reveal an interest in surrealism as well as cartooning. Among Dellagi’s exhibited works is the piece “Telephone”, a sculpture of a female torso turned into an old fashioned telephone. The woman seems to shout: “How did I end up here?” Dellagi’s sculptures are made from papier maché, an unpretentious material which is a fine contrast to the horrid and naïve. Also shown is a collection of Dellagi’s collages. These present a more minimalist approach mixed with fantasy, humor, insanity and the anatomic grotesque.

David Dellagi (b. 1970) works with drawing, collage, sculpture, video and animation. In addition to numerous exhibitions at home, Dellagi’s works has also been shown in Los Angeles and Stockholm etc. In 2012 Dellagi has a solo show in Mexico City, and his works will be presenting by Space of Drawing at Art Herning in the end of January. Dellagi lives and works in Copenhagen. See the artist’s works on display click here
Galleri Christoffer Egelund invites You to the opening of ”Sleeping In the Pine Forest” and ”Insanitorium” Friday January the 20th from 4pm to 7pm. Yuichi Hirako and David Dellagi will be present, and the exhibitions runs until February the 25th. Opening hours: Monday – Friday 11am to 6pm, Saturdays 12pm – 4pm. For further information and press photographs, please contact the gallery: info@egelund.dk or call +45 33 93 92 00. Please also visit our website www.gce.nu