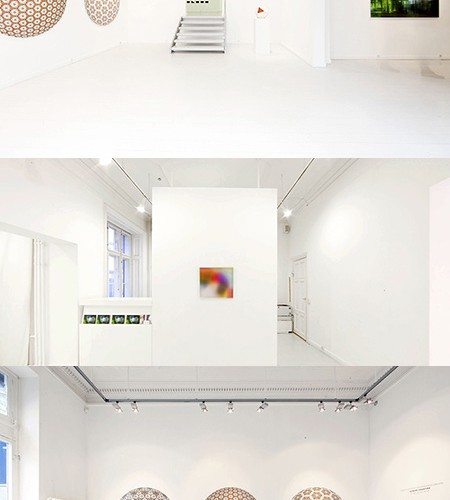 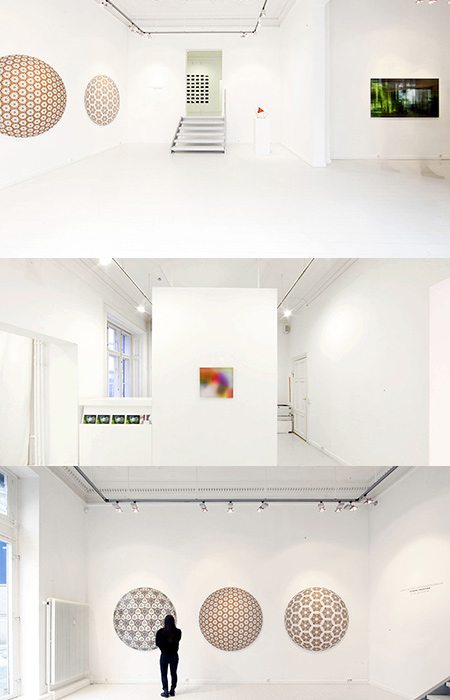 Galleri Christoffer Egelund proudly presents the second solo exhibition with the talented Danish/Swiss photo artist Christoffer Joergensen. Joergensen pulls art photography in previously unseen directions and spell binds us with poetic pictures of the seasons, kaleidoscopic patterns and subtle crossings of portrait photographs. In the hands of the artist the photograph is exposed to a unique transformation from a medium depicting reality to abstraction. At the exhibition Sphere Frontier we are presented with three different series of work in addition to an installation piece entitled Descartes’ Curls.

The Public Sphere series consists of kaleidoscopic patterns that seem to emerge from the walls as dome shaped sculptures. If you get a closer look you will see how the patterns are made out of tiny people and building interiors, owed to the fact that they are photographic fragments of politicians in plenary halls from different parts of the world. The spheres express the tension between public unity and fragmentation.

To create a photograph in the Grogram series Joergensen starts the process by destroying. The Grogram pieces each consists of strips from two cut-up portrait photographs that are weaved together with meticulous care. The horizontal and vertical strips together form a new photograph where the characteristics of the portrayed are combined and blurred. The face is no longer individual but becomes common, almost like a mask, which indeed is the title of one of the pictures; Mask Portrait. The portrait is a traditional image genre, from the antique bust to the profile picture on Facebook. It has been used to display individual personality and character but in the universe of Christoffer Joergensen the individual and the collective are blended together to display a portrait common to all mankind.

The latest series from Joergensen, Seasons, is the most abstract of his work up until now. The structure of horizontal and vertical lines is familiar to us from the Grogram series, but the motive has now completely disappeared into abstraction. Joergensen digitally manipulates and interweaves two photographs displaying blurred, coloured spots and thereby creates poetic seasonal atmospheres. The artwork Winter from the series communicates an almost material feeling of frost and ice using abstract forms and the combined colours of grey, blue and white.

Christoffer Joergensen was born in Denmark but now lives and works in Switzerland. During 2002-2004 he graduated with an MA in photography from the Royal College of Art in London. Joergensen has participated in several group exhibitions at Galleri Christoffer Egelund and is today one of the gallery’s permanent artists. He has also been represented at Charlottenborg´s Spring Exhibition and has had several solo exhibitions in Switzerland.
Galleri Christoffer Egelund invites you to the opening reception of the exhibition ”Sphere Frontier” Friday February 21st from 4pm to 8pm and Artist’s Talk with Christoffer Joergensen starting 4pm. The exhibition will run until the 22nd of March 2014. Opening hours: Monday – Friday from 11-18, Saturdays from 12-16. For further information and press photographs, please contact the gallery at: info@christofferegelund.dk or at +45 33 93 92 00. 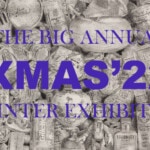 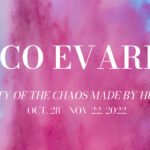 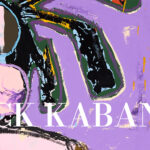 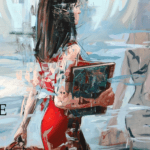