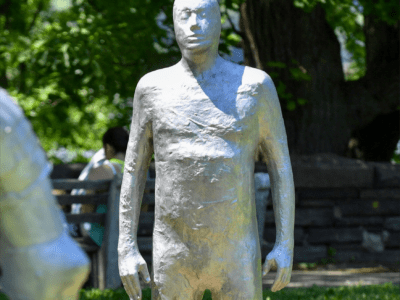 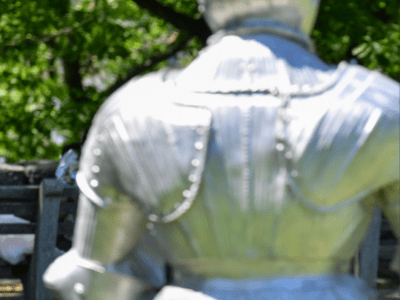 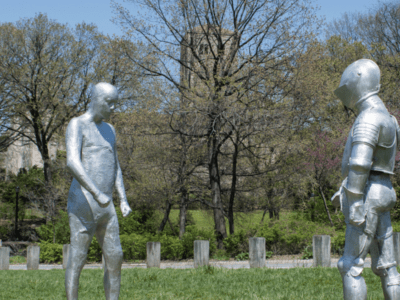 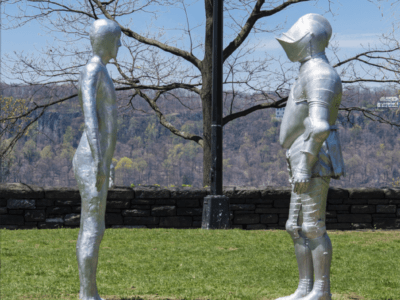 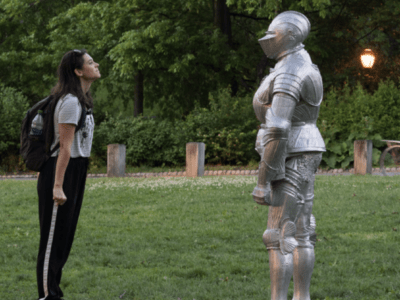 Galleri Christoffer Egelund is proud to announce that the exhibition ARMORS by Icelandic artist Steinunn Thórarinsdóttir will open on Kgs. Nytorv August 24th. After three weeks on Kongens Nytorv the exhibition moves to Sankt Annæ Plads from October 1st  to January 4th 2022.

ARMORS incorporates three life size sculpture pairs in cast aluminium, a total of 6 sculptures. Within each pair a suit of armor stands in humanlike dialogue with a raw, androgynous figure of the same material and human scale. The suits of armor originate from New York City’s Metropolitan Museum of Art permanent collection. Three precious medieval armors were 3D scanned meticulously by the museum and cast into sculptures, a collaboration between the museum and the artist.

The androgynous figures standing against the suits of armor in the installation are central to Thórarinsdóttir’s art. They represent the general human psyche rather than a distinct sex or ethnic identity. The humanlike figure itself is stripped off any societal, cultural and political implications.

Though the incorporation of armor unavoidably references the current global prevalence of war and aggression, the installation uses the suit of armor as an iconographic tool; a collective symbol of guardedness and power standing antithetically to – yet in curious dialogue with the nude open spirit of the humanlike figure.

The pairs symbolize how mankind’s need for protection has been central to our lives for centuries. The merger of medieval armors and ageless, androgynous figures speak to the human condition today and in the past.  At a time when the world is physically and ideologically divided ARMORS is put forward in the public realm to stimulate conversation and bridge differences.

Thorarinsdóttir’s eldest son – who since 1997 has been the base model for most of the artist’s figure casts – posed for ARMORS in a way that subtly emulated the resting posture of each suit of armor. The physical result is that each figure appears capable of fitting directly inside its empty armor, while their mirrored postures also subconsciously establish a firmer bond between each contrasting pair. The interplay and dialogue between the opposing forms of the works are deliberately open to social interpretation.

The installation is life size and stands at ground level in the heart of Copenhagen inviting visitors and Copenhageners alike to actively participate in the dialogue, feel the power within each pair and become part of the conversation.

THE EXHIBITION “CONNECTIONS” IN ODENSE SEPTEMBER 2021

On 1st of September Steinunn Thórarinsdóttir opens the exhibition CONNECTIONS in Odense which consists of life-size cast iron sculptures reflecting the architecture at the SDU campus. CONNECTIONS will be exhibited at the University of Southern Denmark (SDU) inside and outside on campus, in the centre of Odense as well as in Copenhagen, at Strandgade 89 in front of the Icelandic Embassy.

Steinunn Thórarinsdóttir has developed the exhibitions ARMORS and CONNECTIONS in close collaboration with the University of Southern Denmark (SDU) and DIAS Fellow Dr. James Rogers’ interdisciplinary project on war and art.

As an interdisciplinary historian of war and human conflict, James Rogers works with artists to express understandings about the impact of crisis, catastrophe and war on human society. He has worked with Steinunn Thórarinsdóttir for the last five years and utilised her work Borders, Armors, Cairns, and Fragments, to stimulate new interpretations of how people are connected, divided, mentally and physically fragmented, and personally affected by war, conflict, and crisis.

The exhibition CONNECTIONS aims to connect people and stimulate discussion about what divides and unites us as human beings. Read more about CONNECTIONS here.

Thanks to Albani Fonden and Danish Institute for Advanced Study

CONNECTIONS in Odense and ARMORS in Copenhagen are made possible thanks to the Albani Fonden and Danish Institute for Advanced Study, SDU.

Steinunn Thórarinsdóttir is born in Reykjavik, Iceland. She has been working professionally for over 40 years and has exhibited widely in Europe, Japan, USA and Australia. Her works are in private, public and corporate collections worldwide. In Copenhagen her works can be seen at f.e. in Rigshospitalet, by St. Jakobs Kirke in Osterbrogade, in the courtyard of Finansrådet in Amaliegade and outside Terminal 3 at Copenhagen Airport. In 2015 Steinunn ́s exhibition PLACES was staged in various locations in Copenhagen in collaboration with the City of Copenhagen and Galleri Christoffer Egelund.